“Through the ages runes have been sought through mystical practices and revelations, to bring guidance and to serve as magical power objects. The runes of the Infinite Mother not only come as a great gift to fulfill these purposes but to deliver an even greater benefit: enhanced consciousness.

As a sacred guidance system, the runes show us the subtle currents of possibilities, and also lay out a pathway of evolution to stimulate fuller capacities in the practitioner.” (From the Book of Runes – spiritualjourneys.com)

The Runes of the Infinite Mother bring us the power of alchemical change.

The Runes of the Infinite Mother bring us the power of alchemical change through evolving the body and our environment in tandem. Alchemy as the science of transmutation, whereby dissimilar components are combined to create a leveraged result. “In an alchemical equation, the sum total of the components is therefore much more than the parts added together.” Almine 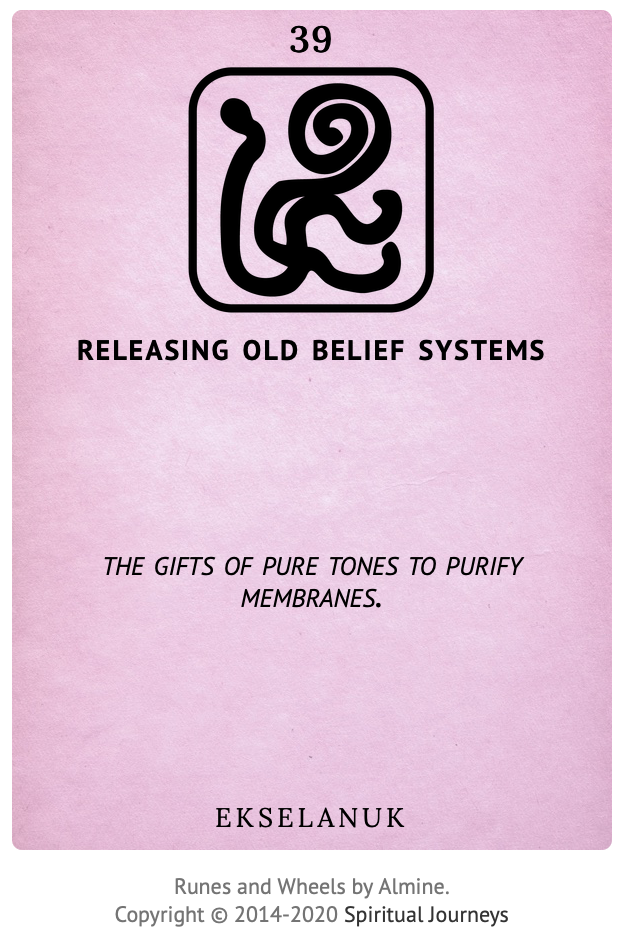 “The 672 runes (in the Book of Runes) are in a very specific order and each has a specific value. Every set forms an alchemical equation, and jointly they form a leveraged result. When the runes are added together into a combined book, the new powerful energy that turns the book into a power object is born. The power of the Rune book will work, even if it is not read. The entire purpose of this book is: The full activation of the inner and outer senses, in order to dissolve the enslaving programs of belief systems.”

In using the Runes for guidance, manifestation, and inner mastery, you are led to cooperating with Infinite Intent in a manner such that all that shifts within is cause for changes without. The Runes form a ‘linguistic bridge’ that communicates between inner and outer realities and causes them to move in synchrony.

As a tool, the runes help to interpret life and to refine perspectives, attitudes, and expression so that you are fully cooperating with the its flawless perfection. They help to clear the membranes between the fields of communication, so that you may master the tool of transcendence, which enables you to leave the old energy source of polarity behind. In transcendence, you attain to ‘the peaceful interaction of multiperspectives’ which becomes a new energy source.

So far, the meridians and chakras have operated in isolation or have been inactive, causing distorted perception and illusion. (You can read about the dysfunctionality in the chakra system in the Book of Runes, and in the meridian system in the Bridge of No Time.) The first seven Rune sets’ powers support clearing and activation of the seven fields of perception, the twelve ordinary meridians, and the eight extraordinary meridians so that all becomes a unified field of indivisible expression. The 7 sets form the equation of the inintial 672 runes (7 * 12 * 8)  received by Almine from 2014-2017. These are a gift of tones to purify the membranes and dissolve the matrices of belief systems, so that we may manifest in the reality of form in a manner beyond the law of compensation.

Almine later received the 8th set of Resurrection, which came in two parts. The second part made up the Runes of the Cosmic Pulse. This too is a set of 96 runes. These are used in many specific spreads to enable refinement of life in such a way that all of life is impacted. We self-refine and self-govern for our eternal existence with this rune set. With the single rune pick, we use is as a portal into infinity that can guide us to self-refine and impact across dimensions of reality.

And then a 9th set appeared–the Runes of the Unfathomable, that took us beyond where mind could to. It is through confounding the mind, that we leave it behind, and enter into the Unfathomable, a reality of no-mind, wherein life ever new flows through our being/body that has now become a portal for the One Life to move all of reality.

Almine explains that existence has a non-linear dimensionality. “Existence is like a perennial flower that continually blooms in the multicosm.” The function of the 8th and 9th sets of runes is to track currents of electric charges multicosmically, and to give guidance for events that originate in other dimensions. (1)

(1) To facilitate their ability to give guidance for events , an inter-dimensional catalyst is needed.” This catalyst are the nine Fragrance Alchemy oils of High Magic. These can be ordered here for US an Canadian customers: academyoffragrancealchemy.com and here for European customers: geurenalchemie.nl

Almine has explained that the first 9 rune sets, though taking us out into the macrocosm, track what is, or what presently exists, while the 3 new rune sets 10, 11, and 12 indicate the potentials…what could be. “This is especially so when coupled with intent and powered by the associated insight of each card.”

Someone asked me something to the effect, “why use the lower fields when the focus is on potentials to actualize now?…should we not just use the 10-12 sets?”

We live in the River of Life that has us engaging the known, the unknown and the unknowable…and then beyond, and navigating through all aspects with mastery is important.

We live on all 12 fields simultaneously, and the first 3 fields that pertain to the known are ones we must become adept in just as much as the higher fields of visioning life anew.

Rune decks 1-2-3, show us about the physical world, and these first 3 fields are what humanity can show us (but not beyond that). (Almine from the Ohio 2019 retreat) – Known

Rune decks 4-9, indicate to us where we can make changes in attitude. “Attitude determines reality.” (Ohio 2019) – Unknown to be make known through experience.

There are many options in terms of what we choose to actualize and emphasize, and bring to clear expression. At this level, we are taking up full potential and following the path of mastery that perceives only one choice: the optimally life-enhancing choice given what we can presently see. With these sets, we are choosing to bring into the known, from the unknown, to refine our lives.

Rune decks 10-11-12, “tell us about potential, what should be lived, areas that we should be putting into our day.” (Ohio 2019) – Unknowable – bringing the unknowable into the unknown through alchemical rune mastery.

With sets 10-12 especially, and the 9th to a degree too, we are bringing fluidity to perspective because perspective now comes from oneness, rather than from what is on the screen of life. “Perception is a portal” (Almine), and when we allow it to open to infinity, we will be expressing the angelic kingdoms anew… they will become much more fluid to be able to hold the wisdom of the moment unfolding.

The 10th set are the Runes of Spiritualized Matter. With the power of these runes, we are led to embodying the reconciliation of the duality of the material and the spiritual, and we merge the two indivisibly. It is then that our environment is experienced as the greater self… as potentials unlived before, which can now activate on our inspired attention to them.

The 11th set bring us the Runes of Limitless Flow of Abundant Supply – using them resolves the duality of limited and limitless.

The 12th set are the Runes of the Great Realizations – They are also referred to as the Runes of Insight Into Mysteries. They support us to insights that rearrange our paradigm of reality, so that as we manifest, we are doing so from visioning a new tomorrow that has never yet existed.

Because the last three Rune sets take us into animating and interacting with emerging potentials, they are used to ‘triangulate’ our space of manifestation and guide our creational efforts with the new Map of Potentials that is in effect at the start of the New Year (2020).

“Within the rich inner infrastructure of man, a river of untapped potential awaits discovery. Like the Yin and the Yang, the inner and outer realities are opposites, divided by their inability to communicate in a mutually understandable way. This seemingly insurmountable language barrier can be overcome however, by developing a linguistic bridge that communicates between the inner and outer realities. Such a bridge is provided by the ancient wisdom of the Runes.

The intent of someone seeking the wisdom of the cards creates a mutual agreement between their inner and outer realities that this is a system that will be the communication method of choice for the outer articulation of inner guidance. A rune representing a specific principle, desired by someone as an expression in his or her environment, can also send a reverse communication from their outer reality to the inner, eliciting support for its manifestation. Carrying a specific rune with us, reading its wisdom frequently and living its guiding principle, the inner potential of our being is alerted to its desirability so that it can aid in its manifestation.”

“The runes must be treated with respect as sacred sigils representing aspects of the inner sanctum of your being, and as the representation of cosmic principles embodied by angel gods. They live through the awareness that they carry and the more you work with them, the more they will be strengthened as a tool of consciousness. They are the messengers of you speaking to yourself from the ancient wisdom of your everlasting being.”